Website:  http://www.lapausa.jp/
Address:  宮城県仙台市青葉区中央4-6-1SS30ビル29F.   Located on the 29th floor of the SS 30 Building next to the Kokusai Hotel and across from the Westin Trust City Buildings.
Map:  Scroll down to the bottom.
Open:  11 am – 9:30 pm but closed weekdays from 4 pm – 5 pm.
I’m really excited about my latest find!  Last weekend while strolling around the SS 30 Building we just happened upon a restaurant whose desserts caught our eye.  Hot apple strudel with vanilla ice cream topped with caramel sauce for only 390 yen.  They also offered a chocolate sundae for the same amount and for those prices we figured we couldn’t go wrong.
We walked in and were seated at a table where we could look out on a fantastic view of beautiful Sendai; all the way to the ocean!
The apple strudel was warm and, with the vanilla ice cream, was the closest thing to hot apple pie a la mode that I’ve had in Sendai.  I really didn’t taste the caramel sauce too much but that was fine by me as I’m not a huge fan of caramel.  The dish was a little on the small size but I felt I definitely got my money’s worth.  My wife’s chocolate sundae was a bit bigger and definitely would have sold for more at another restaurant.  My only complaint was that they added Frosted Flakes, which seems to be the Japanese thing to do with ice cream (if not that, then Corn Flakes).  The coffee that we ordered was also a plus.  I was thinking of recommending this place purely as a nice place to see a great view of the city and have a very reasonable, yet tasty, dessert.


But while we waiting for our order we perused the menu and came upon something that didn’t seem quite right.  It appeared that La Pousa was offering a two-hour all-you-can-eat menu for only 1490 yen per person.  We asked if this was correct and the waitress said that it was.  I told my wife, “We got to try this next weekend!”


So today we returned for lunch and again were seated at a window table.  We ordered their tabehoudai lunch, which came with a couple of stipulations.  First, a single diner cannot order the all-you-can-eat; there must be at least two people.  Also, since there were only two of us, we were only allowed to order one pizza and two pastas at a time.  When we finished those platters, we could then order more.  The more people there are in your party, the more platters you are allowed to order initially.
The tabehoudai menu came with a Caesar salad and French fries (more on the fries later) and offered eight different kinds of pizzas and seventeen different varieties of pasta to choose from.  Sure they had everybody’s favorites like tuna curry with mayonnaise pizza and fish egg with natto pasta, be we went with the simpler fare of pepperoni pizza (called イタリアンサラミ), eggplant and meat sauce pasta (for me), and baby clams with pasta (for my wife).
The dressing on the salad was okay, but maybe a little too … plain, but still not bad.  The pepperoni pizza was very thin but crisp and tasty.  It was definitely not the best pizza I’ve had, by far, but it’s hard to screw up pepperoni pizza, and they didn’t.  My meat sauce pasta was a little weak in the meat and tomato flavor department, but it was a little buttery so it still had some taste to it.   My wife said her pasta was quite good but lacking in the quantity of clams (we counted three).

After devouring these dishes we ordered a マルゲリータピッツア.   This wasn’t as good as the pepperoni as it was limp and not very flavorful (but probably still better than the 温泉卵 pizza).
And within that thirty-five minute period we were done ordering … pretty much.  We were full … pretty much.   Why so soon?  The fries!!!  I haven’t eaten fries in quite a while, and these were really delicious!  We couldn’t stop eating them!   That’s probably their ploy.  Let’s offer a wide variety of dishes but have them fill up on our cheap, but irresistible taters!  Well, they hooked us.  The fries were crispy and salted to perfection.


But because I have deep pockets I said, “The hell with the cost!  I want dessert!” and splurged for the classic chocolate cake for an additional 150 yen.  And it seemed like I got what I paid for.  Quite good for 150 yen, but probably not for 500 yen.


Taking everything into account, I was more than satisfied with La Pousa.  The food was pretty good, the service was very good, the price was great, and the view was fantastic!


There is paid parking available at the SS 30 Building and La Pousa gives a 400 yen parking voucher for orders over 2000 yen.  With the voucher we still ended up having to pay 200 yen for parking.
If you and your friends are looking for a cheap yet enjoyable place to eat, I highly recommend La Pausa.  And if you have a group of big eaters, this is the place for you!  Sure it’s not gourmet food, but it’s tasty and has a great view. 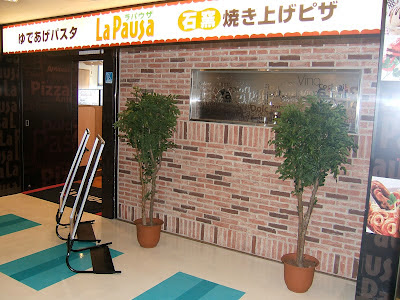 Oh, I forgot to mention their nomihoudai deal.  It appears that for an additional 1200 yen you can imbibe on their all-you-can-drink beverages for two hours,  too!

dude, thanks for the recommendation,

If you're in Nagamachi-minami, might I suggest the new Amo La Pizza?