To read a previous post on this melon pan, please click HERE.
Just to let you know that from Friday, October 25th to Sunday, October 27th, the scrumptious Happy Happy Melon Truck is returning to its spot in front of Daiei Department Store just one month after its last visit.

This truck full of goodness usually waits three to four months before a return engagement, so I'm surprised and delighted that I'll be able to devour their hot, fresh melon pan.

I'll see you there!
Posted by Picky in Sendai No comments:


Address:  仙台市青葉区一番町2-7-3日泉ビル２F.   Located on Ichibancho between Aoba-dori and Minamimachi-dori, closer to the latter.
Map:  Scroll down below.
Lunchtime is from 11 am to 1:30 pm, but open till 4:30 pm, and reopened from 6:30 pm till 10 pm.
Today, while heading down Ichibancho to a tried and true meal at CoCo’s Curry, I stumbled upon a new scene, a Hawaiian scene.  What caught my eye was the tantalizing egg, bacon, and pancake set advertised on their outside blackboard.
Could this be true?  An American-style breakfast?
I had to forgo my original plan and divert my grumbling stomach to the second floor of the 日泉Building where I found Kau Kau at the end of the hallway.
I’ve never traveled to Hawaii, so I don’t know what those islanders eat, but according to this restaurant. it’s pancakes!
Upon entering, I found a few Hawaiian leis, palm trees, and two TV monitors displaying sights of Hawaii, as well as the two waitresses wearing Hawaiian shirts making up the motif of this restaurant.
As I’ve mentioned in previous posts, when you enter any ethnic restaurant in Japan, you pretty much have to be willing to overlook a few (or a lot of) things.  So I considered what was done to create a Hawaiian atmosphere as cute, and decided to focus on the food.
Maybe I should have stuck to praising the decorations.
Kau Kau offers a number of lunch sets that range from 700 yen to 900 yen (tax not included), which come with a salad, drink, rice or pancakes (some only with rice).  The variety of options include:  hamburger patty, garlic shrimp, SPAM, coconut cheese risotto, アヒアポ丼,and モチコチ chicken, though I have no idea what the Japanese means on the last two selections.
Although the hamburger patty and chicken lunch options did look tempting, I stayed true to course and went with the sunny-side up egg, bacon, and pancake set  (800 yen + tax) from their regular menu.
After ordering, I was directed to help myself to some salad, which I thought was a nice service.  There were two big fish-shaped wooden bowls filled with loads of iceberg lettuce (the cheap stuff) with an eensy-weensy bit of color in it, perhaps a shaving of carrots or red cabbage.  But I was starving and so I loaded up my plate.  The dressing was tangy with an unrecognizable, yet pleasing flavor.  Next to the dressing was a big bottle of Heinz 57 Ketchup.  Do Hawaiians put ketchup on their salads?
While waiting, little by little the restaurant started filling up.  I noticed when a plate of banana-chocolate pancakes was brought to a table nearby.  I didn’t want to stare but, at a glance, the two pancakes appeared to be quite big and topped off with a volcano of whipped cream, yet the platter also seemed to be lacking in the banana and chocolate portions.
When my meal arrived, I immediately started fussing with my camera to take photos for this post.  Apparently, that was time well wasted as a couple of minutes later the first forkful that entered my mouth with lukewarm egg and bacon told me I should have gone with the first shot and then dove into the food.

Hot breakfast food should be served very warm, not lukewarm, as it was in this case.  Luckily, the pancakes (actually, two halves of one big pancake) were served pippin' warm.
Surprisingly, I was not given any syrup!  I don’t know if this was an oversight, but when I asked for it they didn’t apologize for not giving it to me originally.
Other than the serving temperature of the egg, I had no problem with it.  The bacon was Canadian bacon, limp yet tasty (no offense, Canadians) and not the traditional, crispy bacon served in America.
The pancakes were good, but not great.  Nothing wrong with them, but my local IHOP back in the States is much better.  In Sendai, more flavorful flapjacks can be found at Mitsubachi 38.
My platter also came with a salad that included a few more slivers of carrots and red cabbage, which made me wonder why they offer a free salad to begin with.
Kau Kau also provides a number of alcoholic and fluit (sic) beverages, if you so desire.  I also noticed Eggs Benedict at the bottom of the menu; a first in Japan.
Overall, this is not a bad meal; it’s just not a great one.  I’m tempted to return to try the hamburger patty and the chicken.  If you’re in the area and looking for something different, I think you should try Kau Kau and see for yourself.

I know that this is a really late message, but if you get a chance tomorrow, Sunday, October 13th, head on down to the quad in front of City Hall for some scrumptious-looking food and some fun entertainment!
I have to add the disclaimer that I actually didn’t eat at the YOSAKOI festival today, because I ventured there after a great lunch at my favorite pizza place, amo la Pizza, so I don’t really know if the grub is good.  But, I was amazed at the variety of victuals the vendors offered!

The food looks best at the 市役所前, but for entertainment value, head over to Kotodai-koen for the genki-er dance acts.
I saw some great routines today from a couple of university student groups and even a psuedo-AKB48 group from Tokyo. 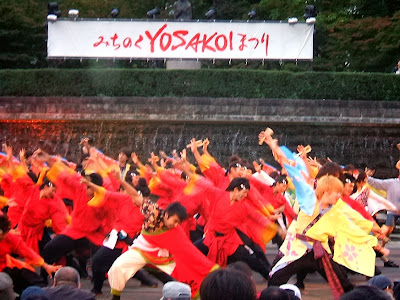 There are also quite a few free, live concert performances planned for tomorrow on Ichibancho-dori.  I noticed a  couple of stages set up Hirose-dori and Jozen-ji dori.
These don’t appear to have any relationship with the YOSAKOI matsuri, but it is great timing.
I hope you can enjoy downtown Sendai tomorrow!


Address:  仙台市宮城野区岩切分台1-4-4 ルシアンKATOビル１F.   Located about 400 meters from Iwakiri JR Station on the JR Tohoku Line.  Or if driving, just off of Route 35 coming from Route 8, behind the COOP Market.
Map:  Scroll down below.
Open: 11 am – 7 pm.
One of my best friends, Yvonne, recommended this unique restaurant to me some months ago, and although she gave a very enticing description of the fare offered at Kagayaki, I just couldn’t wrap my head around the idea of bread being served as a meal.
Since this restaurant was Yvonne’s idea, I asked her to join my wife and me for lunch on a recent Saturday afternoon to delight in these baked goodies.
There were four different meal options on the menu, including one brunch set, and all came with a salad and soup.
Let me get the soup and salad out of the way.  Actually, there’s not much to talk about.  They were both pleasing, but nothing to write home about.


I went with the B set for 680 yen, which included the following three types of bread:
-Shrimp and broccoli with white sauce gratin:  Maybe it was because I’m a picky eater, but I really didn’t care for this.  I like broccoli and I’m usually okay with shrimp, but I wouldn’t normally order anything that came with white sauce or gratin.  I guess it was to be expected that this would be my least favorite.
-Buttered potato with corn:  This was quite good, as it reminded me of my beloved corn bread.   I could’ve gone for another slice of this!
-Herb and green bell pepper, onion, cherry tomatoes, and Parmesan cheese:  This pizza-tasting slice was also very savory.

My wife and Yvonne (both non-picky eaters), both ordered the Brunch Set for 680 yen, which came with the following bread selections:
-Italian Blue Cheese and Miyagi zucchini:  My better half stated that this was her favorite, and she really enjoyed devouring this one.  Yvonne also expressed that she preferred this slice over the other three.
-Small fish and tomato:  Nope, my wife didn’t care for this one, but still, she cleaned her plate.  My normal-eater friend wasn't impressed with this one, either.   Perhaps the restaurant might want to rethink this dish.
-Herb and green bell pepper, onion, cherry tomatoes, and Parmesan cheese:  This was the same slice that came with my set, and it was a winner of the 'good taste' award by unanimous decision.

We all opted for hot coffee for an additional 200 yen, as well as ordering dessert.
My wife decided upon a slice of chocolate cake.  I pleaded for a taste and found it to be nice, but not very sweet.


Yvonne went with a strawberry sundae (350 yen), and I went with a banana chocolate sundae, only to be informed that they were out of bananas.  They offered me a choice of any other fruit substitute for a 50 yen discount.  I requested strawberries instead and it went well with the chocolate sauce.

I recommended Kagayaki to a friend of mine, Keiko (another non-picky eater), and she purchased three loaves of bread to take home, I believe at a cost of 1200 yen each.  She mentioned that, unlike me, she liked the shrimp and broccoli the best, with a chestnut and mushroom loaf coming in second.  I’m guessing she thought the cheese bread came in third.
If you get a chance, sit by the window to catch a glimpse of the bullet train streak by every now and then.
There’s plenty of parking if you travel by car and the restaurant itself is quite spacious.
I recommend Kagayaki due to its uniqueness, as I’ve never run across a meal such as this.  If you’re looking for something different, try some unconventional slices of the staff of life.