Review of the National Gyoza Festival in Sendai

Website:  http://gyoza.strikingly.com
Address:  Kokusai Center Subway Station.
Map:  Check on their website.
Sunday, July 2nd from 10 am to 4 pm.
For more info, please read my initial posting of this event HERE.
When I realized in the late afternoon that it would not rain today, I decided to venture on out and fight the crowds at the famed Gyoza Matsuri.  I was concerned that with today’s heat and humidity that waiting in line with a bunch of strangers for a small sampling of food might not make for an enjoyable afternoon.
But to my surprise upon arrival at around 3 pm, I discovered that the event was NOT crowded at all!  In fact, all but two of the gyoza stalls had lines.  There were lots of people there, but no lines.

For my first sampling, I chose the Utsunomiya Gyoza, which did have a line.  Of course it had a line; Utsnomiya and gyoza go hand-in-hand.  I had to wait a WHOLE five-stomach growling-minutes.  I was unable to find a seat under a tent so I went to one of the many standing tables available.
This was good gyoza!  Crispy on the outside with a flavorful filling.  And at five dumplings for 300 yen, I recommend this one! 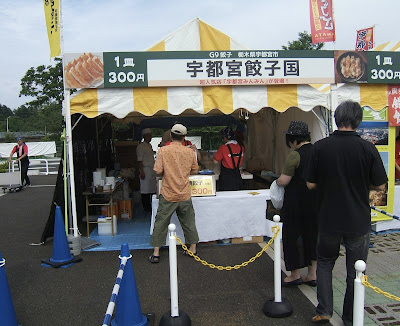 Next, I moseyed on over to the other stall that had a loooooooong line (I waited three-minutes tops) for a jumbo Tsu Gyoza from Mie Prefecture.  This was one puffy pot sticker reportedly registering 15 cm in length.  (This time I was able to find a seat under a tent, but it was so hot it didn’t feel like the shade helped that much.)  The wrapping was thick and a bit crispy, stuffed with all the flavors that you’d expect.  This was good, but I liked the Utsunomiya Gyoza better. 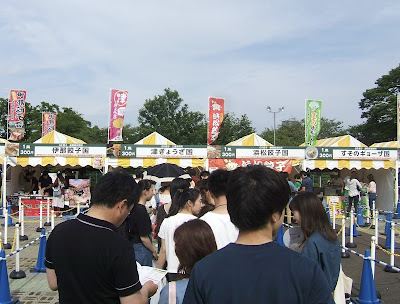 For what I thought was my final taste testing, I decided to try the Fukushima Gyoza, as that booth had accumulated a short line.  Apparently, Fukushima Gyoza is popular due to its emphasis on vegetable fillings, and for the fact that 700 of these gyoza can be cooked at the same time.  This gyoza was very good!  I recommend this one, too!  Very similar to the Utsunomiya Gyoza. 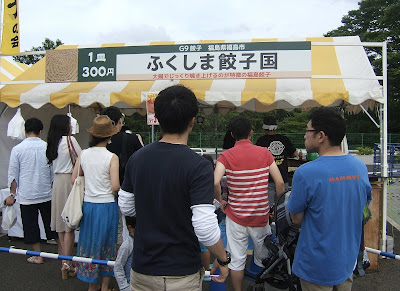 While waiting in line, I ran into my friend, Fumika, who graciously invited me to join her and her friend.  They had purchased the Hachiman Gyoza from Fukuoka Prefecture, which uses yuzu pepper as a condiment, and offered me a dumpling.
We all first tried the gyoza without the yuzu pepper.  It was good, as I detected a slight sweetness to it.  Then we all tried the yuzu pepper by itself.  The yuza flavoring was sour, the pepper strong.  I guess that was to be expected. 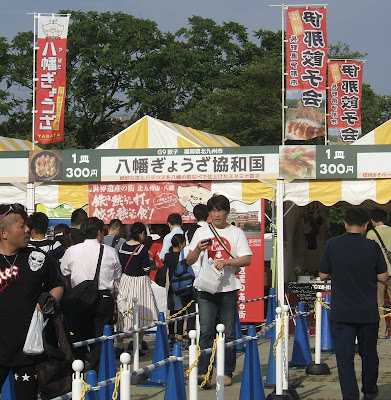 I suspect that since it’s supposed to be sunny tomorrow, that’s when the crowds will flock to this event, so I’m glad I battled the heat today.

Also, if the tents are crowded, you might want to try the Kokusai Center Station viewing platform.  There are tables, chairs, steps, and most importantly, shade!
If you try some of the other gyoza, please let me know what you thought of it.
Have fun if you go!

Website:  http://gyoza.strikingly.com
Address:  Kokusai Center Subway Station.
Map:  Check on their website.
Saturday, July 1st from 10 am to 6 pm, and Sunday, July 2nd from 10 am to 4 pm.
I stopped by late Sunday afternoon during last year’s festivities, and some of the gyoza booths had already sold out, while other stalls had lines that were more than a 40-minute wait.  This proved to be an extremely popular event in 2016.
Still, it was fun to sit, eat, and watch the crowd enjoy themselves.  I also got a glimpse of Gyoza Man (?-I don’t know he calls himself).

Kirin Beer is once again hosting this gyoza extravaganza and there are live performances scheduled throughout the event.
All the vendors are selling their gyoza packages for 300 yen, which are usually four dumplings per pack.
I’m sorry, but I really don’t remember my impressions on the pot stickers from last year, but I’ll add a few photos just to give you an idea.
Hope to see you there! 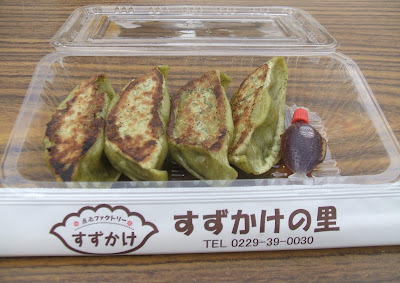 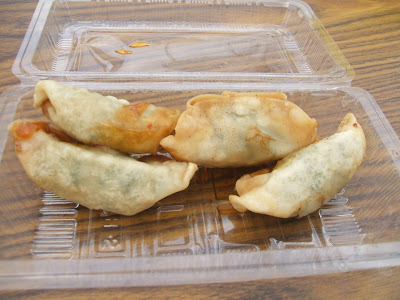 Address:  仙台市青葉区中央１－１－１エスパル仙台東館2F.  Located on the second floor of the new S-Pal addition to Sendai Station, close to the East Exit.
Map:  Scroll down below.
Open:  Everyday from 10 am to 10 pm, but apparently they sell onigiri from 8 am to 10 am.

A couple of years ago a world-traveling student of mine, Chiaki, told me of her favorite restaurant in Narita Airport.  She said she would often delay her return to Sendai just so that she could eat at だし茶漬けえん, which specializes in ochazuke (お茶請け).
I tried it on my next vacation and it has become my “go-to” spot whenever I fly out of Narita.
If you’ve never eaten ochazuke (お茶請け), it’s simply pouring green tea on a bowl of rice with varied ingredients.  It reminds me somewhat of the Campbell’s Chicken with Rice Soup that I loved as a kid.
While recently taking a leisurely stroll among the new shops and restaurants in the newly renovated S-Pal addition at Sendai Station, I was pleasantly surprised to find that だし茶漬けえん had come to Tohoku.
The restaurant is small and somewhat hidden.  The pink (?) circle marks the restaurant.  (Besides being picky, I’m also colorblind, so it may not be pink.) 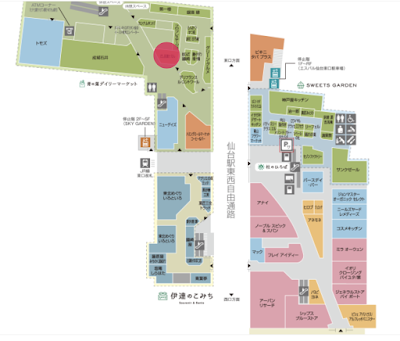 You order your meal using an electronic touch screen monitor.  A nice feature of this device is that it allows you to choose the language you would like to use (Japanese, English, Chinese, or Korean).  You can also choose which size bowl of rice you would like (small, regular, large), though all sizes are the same price.  Once you have confirmed your order, insert your money to pay and it will spit out a receipt that you hand to the waiter.

I ordered a regular serving of Chicken Rice and Amami Island’s Best Selected Products (奄美大島 鶏飯風だし茶漬け) for 721 yen and my wife ordered the Grilled Salmon with Red Salmon Eggs (the restaurant lists it as caviar-焼き鮭といくらの親子だし茶漬け) for 821 yen.
The rice bowl I received had small chunks of chicken, shredded egg yolk, spinach, sliced shitake mushrooms, and しば漬け (shibazuke-a Kyoto specialty of pickled eggplant), and the whole thing looked rather plain.  Then I had fun pouring the green tea into the bowl and watching it transform into a savory soup!  If you would like to savor the soup a little more, you can also order a refill of your green tea pot at no extra charge!
The chicken itself was just boiled chicken and didn’t have any special seasoning to it.  But because of the mixture of the other ingredients, the soup was quite enjoyable.
The meal also came with a small serving of 冷奴 (hiyayakko-chilled tofu with a sesame soy sauce), ヒジキ (hijiki-a sea plant), and pickled cucumber.

The chilled tofu had a definite sesame seed taste and was a little sweet.  I’m really not too keen on tofu but this was quite good.
I instantly classified the hijiki as seafood because it looked like seafood.  I don’t eat seafood.  I gave it to my wife.  She really enjoyed it.  I enjoyed not having to eat it.
The pickled cucumber was quite sour but it went well with the chicken-rice soup.
My wife said that her bowl of grilled salmon with salmon eggs had a definite nostalgic Japanese taste which she really enjoyed.  She also thought that because of the sesame soy sauce, the chilled tofu had a unique taste.  She described the entire meal as having a “natural, simple taste.”

That natural, simple taste I feel translates into a light meal, which is one reason I liked eating this before boarding a plane at Narita Airport.  It satisfies my hunger but does not make my stomach feel heavy.


If you’re starving and are hunkering for a mass quantity of grease, calories, and fat (which at times has a useful purpose), this may not be the restaurant for you.  But if you are looking for a gratifying, tasteful meal that won’t weigh you down, this is the place to go!