Address:  仙台市青葉区二日町12-25グランディプレステージ１F.  In between Kotodai-Koen Station and Kita-Yobancho Station on the same side as City Hall.

Map:  Scroll to the bottom.

I’ve only been here twice but both times were quite enjoyable and I look forward to returning to try the different varieties of pancakes.   On my first visit during a Saturday lunchtime, I wanted to order the chicken curry with pancakes lunch set but they were already sold out.   So I went with the hamburger and pancakes set.  Hamburger and pancakes, not your usual combo, is it?
The hamburger had slices of eggplant mixed in a tomato sauce and it was pretty good.  And considering that I don’t like eggplant very much, I think that’s quite a compliment.

The 1380円 lunch set came with a vegetable broth soup, small salad, the hamburger patty, three pancakes, a small yogurt dessert (which I didn’t like), and a beverage of your choice.

The pancakes were nice and light, but I suggest eating them right away because they can get cold quite quickly.  The butter used is supposedly made there at the restaurant.

They have a separate breakfast menu that is served until 10 am (see picture below). 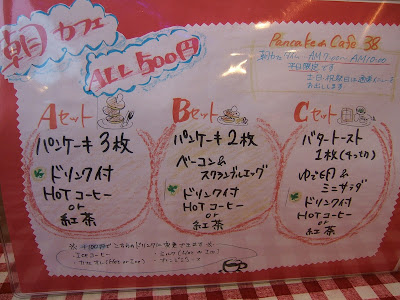 The place is small and I saw a couple of people turned away as the restaurant was full (again, this was during a weekend lunchtime).

On my second visit I ordered the three buttermilk pancakes with two small scoops of vanilla ice cream.  The actual dish looked different from the photo on the menu (see above photos) so don’t be surprised, however, the pancakes were again light and fluffy.

My wife ordered the caramel pancakes which were good but not as sweet as I imagined.


I was quite satisfied with the food but I wasn’t too happy about the coffee.  A good cup of joe is the perfect crowning point to a great meal.  Well, they dropped the crown here.  After eating the sweetness of the pancakes and ice cream, a deep, rich cup of coffee would have punctuated the meal.  Instead, the coffee kind of said, “I think that’s about it.”

Still, I recommend this place.  Our second visit was on a national holiday at around 5 pm and the place was empty, so I guess timing is everything.


There is no free parking nor stamp card.