Website:  http://foodconvention.net/
Address:  錦町公園 (仙台市青葉区本町).Nishikichō Park is located about a five-minute walk from Kotodai-koen Subway Station.
Map:  Scroll down below.
Open tomorrow Sunday, October 5th from 11 am to 5 pm.
Strolling into Nishikichō Koen this gorgeous afternoon, the many aromas of different delicacies wafted through the air.  Upon first glance, this Food Convention seemed much smaller than what I imagined, yet there was enough of a variety of goodies to choose from.

I started off with a steak sandwich (500 yen) from the JAMIN/Le Café de Herisson booth.  It was quite popular and I had to wait in line for about ten minutes.  The bread was soft and tasty.  The meat was very tender, but a bit undercooked for my liking.  However, I’ve noticed that many Japanese restaurants serve their steaks while it is still red in the middle.  I don’t mind pink, but I don’t like my meat still red.  The sauce was quite delectable.

Next, was the green curry (500 yen) from the SABAI SABAI Thai Restaurant booth.  This was quite spicy and caused some sweat beads to be formed, but the bamboo shoots had a hint of sweetness to them and the chicken was amazingly tender.  This was a good choice!

Dessert was in order so we went for the apple-cinnamon focaccia (300 yen) from the AL FIORE stand.  The apples were quite sweet and delicious, but there wasn’t enough cinnamon flavor.   The bread was soft, but I was expecting sweeter.

I was thrilled to see my favorite fritters, サーターアンダーギ, being sold (150 yen) at the 仁藤商店 booth, but this was also a disappointment.  They were too greasy and not very sweet. 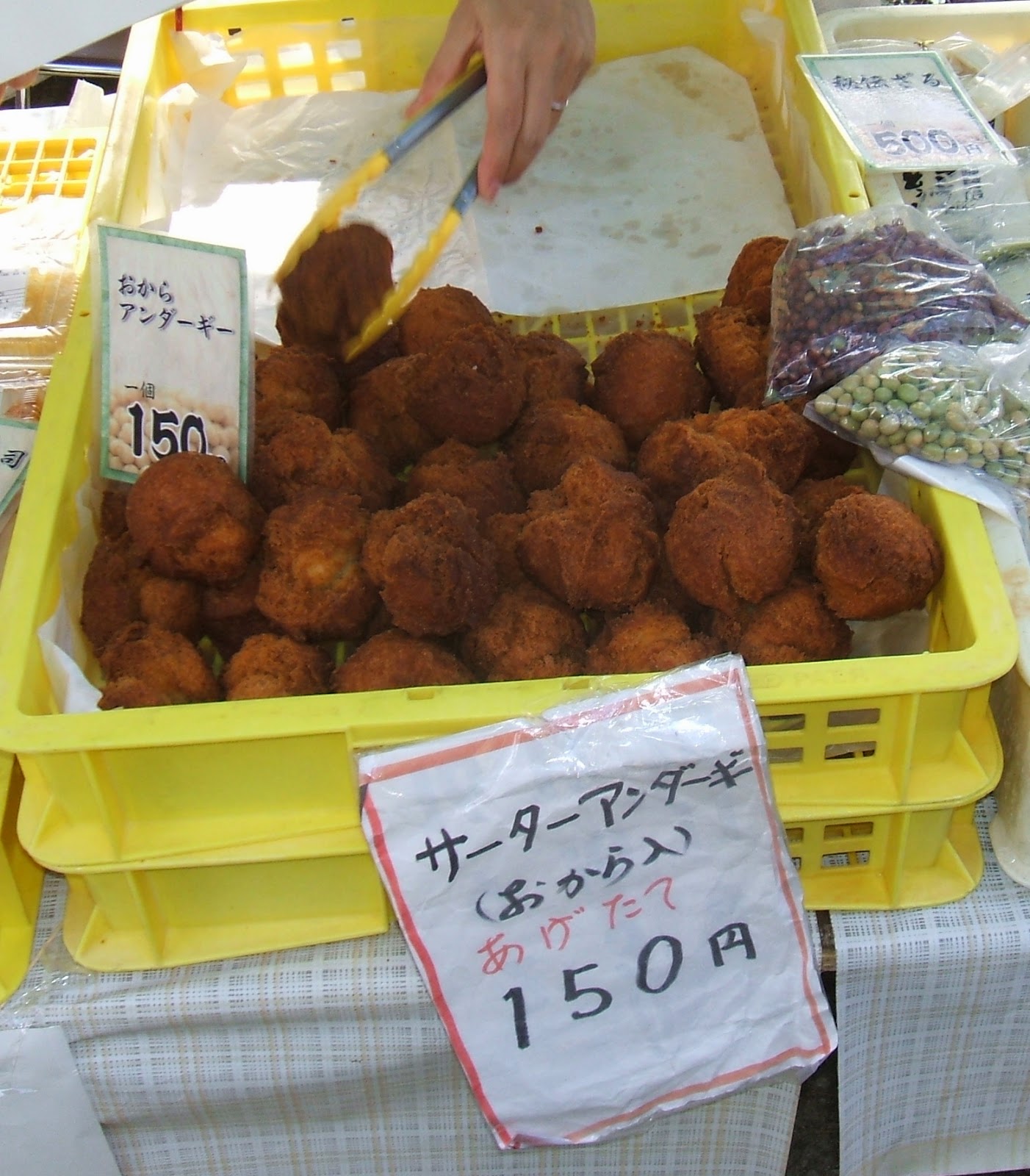 We left for a few hours but then returned for some more snacks.  I tried the grilled beef (350 yen) from 三丁目小福, but it was miniscule compared to the photo.  Still, it was flavorful, but not worth the money.  Earlier in the day, this stand was extremely popular, but maybe it was another item on their menu that was a big hit.

Lastly, I tried the salsiccia sausage (500 yen) from Café & Restaurant GALLOW, but unfortunately, I forgot to take a photo.  You could tell this wiener was grilled to perfection with the sensation of a tart, crisp, juicy sausage upon the first bite. 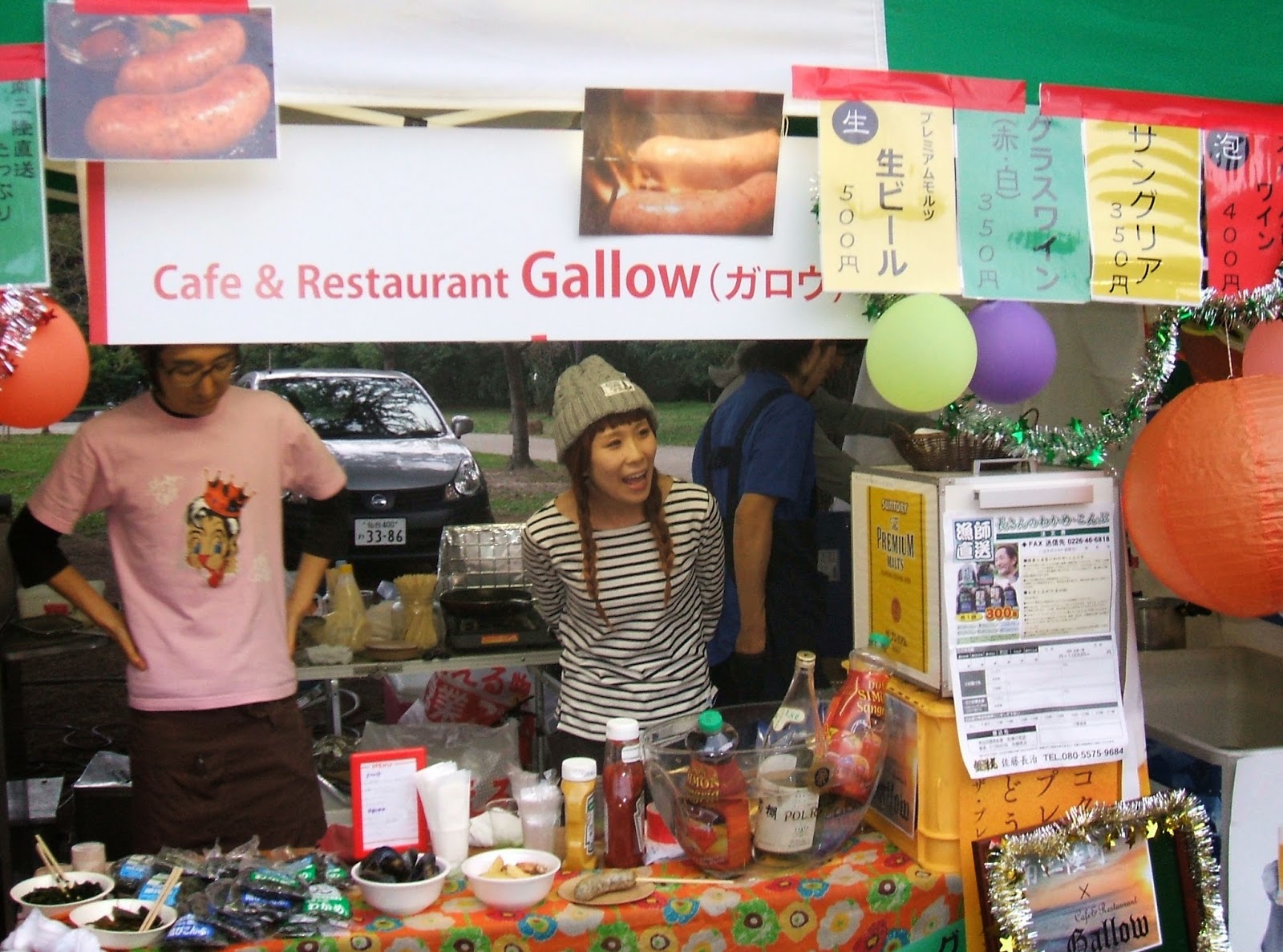 There were many other tantalizing tastes to be found, but I was just too full.
If you get the chance, I recommend a trek out to Nishikichō Park for a food adventure!

Hey it's too bad that we didn't get to see each other. What do you think overall about the convention compared to izumi food marche? I think it was quite good but a bit underwhelming/disappointing. Looking forward to your future posts, here's one recommendation of my favorite place if you'd like http://tabelog.com/miyagi/A0401/A040101/4011927/.

Hi Junny,
Maybe we'll run into each other another time.
I enjoyed the atmosphere of the Food Convention, but it was much smaller and limited in variety compared to the Izumi Marche.
There were three or four different booths offering the same salsiccia sausage, and one booth was offering imoni soup, which isn't very special (I had went to an imonikai the week before).
I think it should have been called the "Sendai Food MIni-Convention."
And thanks for your tonkatsu recommendation. I'd like to try it!
And thanks, again, for reading!