Website:  http://www.welcome-montana.com/
Address:  仙台市泉区福岡字森下2-3.   Located way out in the boonies on the way to Izumigatake and Spring Valley Ski Resort on Route 223.
Map:  Scroll down below.
Open weekdays from 11 am till 7 pm, weekends and holidays open till 9 pm.  Closed Tuesdays.
Upon returning from a recent snowboarding trip to Spring Valley, my good friends, Yvonne and Fong, and I stopped by the Montana restaurant.  I heard about this famed American restaurant some time ago, and had visited once before a few years before I started my blog.
From the log cabin architecture and the Pontiac Trans Am in the parking lot, to the interior rich with Americana artifacts, this place so reminded me of my homeland. 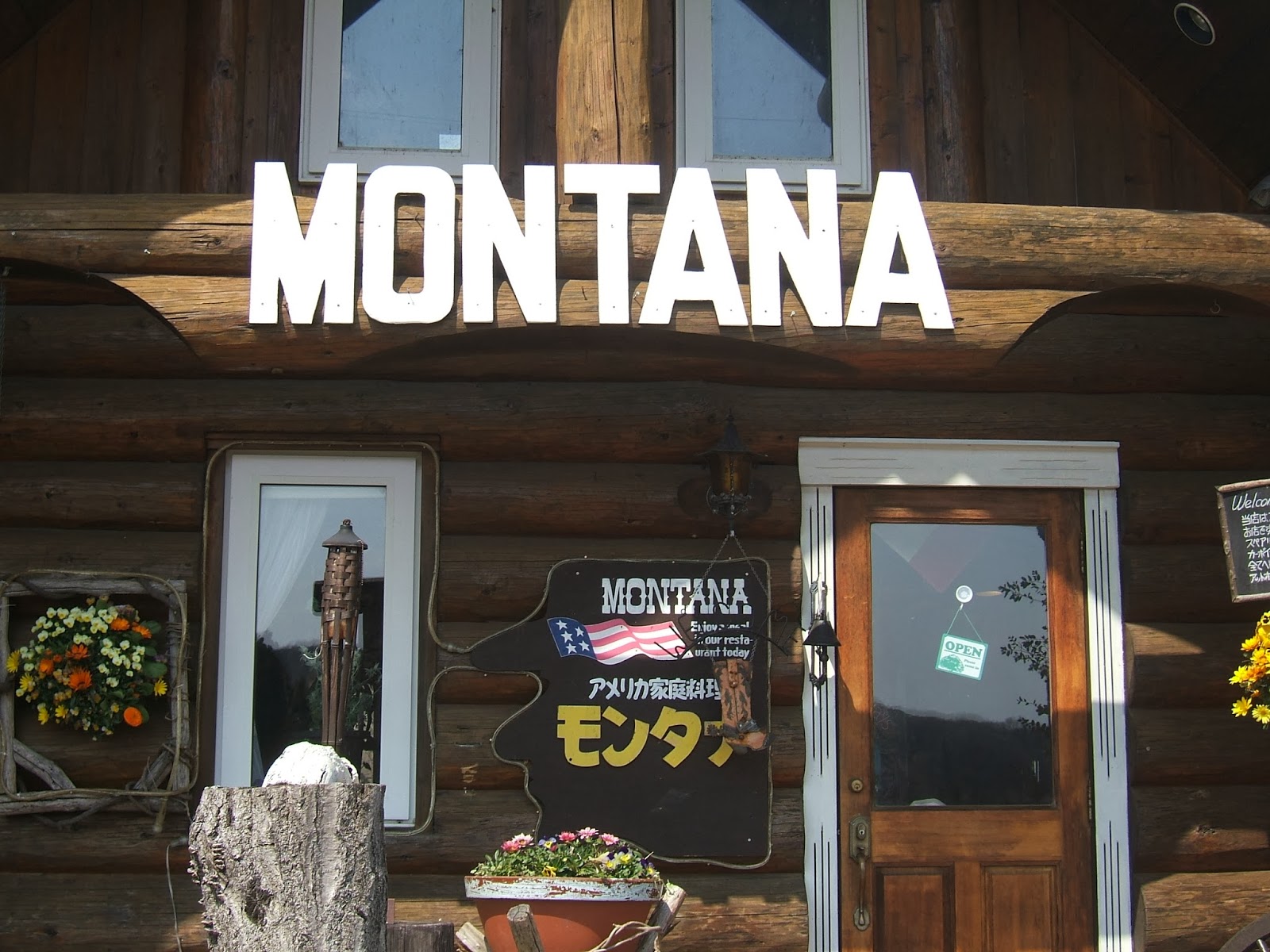 Sitting near the wood-burning stove added an additional sense of coziness and warmth.
But my companions and I were starving, and although we enjoyed the atmosphere, we wanted to dig into some good-ole American grub!
We started off with an order of french fries (682 yen), which were actually thick potato wedges.  Crispy on the outside and seasoned just right!  Although, they seemed to be oven baked rather than fried, this was a plus as they were not the least bit greasy.  What a great way to start a meal!

Following the fries, came the Big Burger Sandwich (1312 yen w/drink), and true to its word, it was BIG!  Vonnie and I would have been better off had we shared one sandwich as we originally had planned, that’s how big it was.   However, it was mostly the romaine and iceberg lettuce that added to its size, along with the thick slices of bread, and not the amount of beef. The hamburger patty itself was quite flavorful, but I would’ve preferred to have it cooked just a little more thoroughly.

Next came the Cowboy Rice (945 yen), which we ordered out of curiosity.  “What the hell is Cowboy Rice?” was the question being asked at our table, where two of the three diners were American born and bred.  According to the menu, this dish is a Montana original mix of chili, cheese, and rice.  To be honest, I didn’t have my glasses with me at the time, and had I read that it had cheese, I would have passed on it.  But after sampling a couple of spoonfuls, I would also recommend that you pass on it, too!  No flavor whatsoever.  It seemed as if they opened a can of Hormel chili beans and put it on top of the rice.  If this is what the cowboys ate, no wonder there ain’t many left.

Because our eyes were much bigger than our stomachs, we finished off our American-style feast with the Max platter of spareribs (2940 yen).  In my opinion, spareribs should be so tender that you can separate the meat from the bone with a fork, and then let the succulent beef or pork melt in your mouth.
Well, I had to use a knife.  And, I had to chew… a lot.
Although the barbeque sauce was delicious, these were not the finger-licking spareribs I remember from home.

One thing I found interesting, in a good way, was the coffee that came with the hamburger set we had chosen.  I normally do not care for flavored coffees, but Montana’s coffee had what I believe to be a hint of cocoa, which was enjoyable.
Overall, I think you should try Montana if you are in the area, but I wouldn’t drive out of my way for a meal here.  My normal-eater friends were in agreement with me on this.
The next time I’m returning from Spring Valley, I would definitely want to stop in Montana for their tasty Big Burger, fries, and coffee, but that’s about it.

I haven't been there in about a decade but I recall thoroughly enjoying my meal. Montana's often has a booth set up during the International Fair at the Kokusai Centre every Sept. I've had the ribs then and they were pretty tasty.

It wasn't bad. It just wasn't as good as I hoped it would be.