Address:  宮城県宮城郡利府町青葉台2-1-120.   Located … somewhere in Rifu?  Sorry about this, but I was driven to this neighborhood and then we walked through a residential area to get here, so I couldn’t find it again without looking up my own map that I posted below.
Map:  Scroll down below.
Open: Thursday thru Sunday from 10 am to 6 pm.
Thanks to my friend, Tony, who introduced me to this very hidden slice of yumminess.  I’ve only visited once but I was quite impressed with what I devoured.
This is a very small mom & pop operation (although the mom & pop are rather young) run out of their home.  Spica offers a wide variety of bread and bagel vittles, but the menu changes on a daily basis.
On the lucky day I ventured in, the pickings were slim since I turned up after noontime and most of the baskets of baked goods were already bare.
I was starving so I opted for a bagel pizza (230 yen) with semi-dry tomatoes, herbs, and cheese, sprinkled with olive oil.  Did I forgot to mention that, picky me, I’m not crazy about bagels (nor cheese)?  But due to my aforementioned pickiness, this seemed to be the best option available.
Fortunately, I was pleasantly surprised!  The bagel didn’t have the rock hard texture that I dislike about your average bagel, and the combination of the dry tomatoes, herbs, and olive oil was fantastic!  It was a bit messy, as I had to dodge the dripping (delectable) olive oil.

I also savored a scrumptious cranberry scone (140 yen).  The dough was indeed very flaky and flavorful!  I can’t believe that supermarkets sell crappy, factory manufactured tasteless dough products for the same price.  I also forgot to mention that scones as a category would not top my list of favorite desserts, but this one was great!

According to their blog (address above), they hold events on the 4th floor of PARCO Department Store in downtown Sendai from time to time.  If you have an opportunity to venture to Rifu, I highly recommend Spica!


Address:  宮城県宮城郡松島町高城字浜３８－３.   Located just off Route 45 near Matsushima Dai-ichi Elementary School.  About a 15-minute walk from Matsushima JR Station (not to be confused with the more touristy Matsushima-kaigan JR Station.  Although, it’s about a 25 to 30-minute walk from there).
Map:  Scroll down below.
Open:  Their website states 10 am to 7 pm from April to October, and closing at 6 pm from November to March.  But in reality they seem to close at 5 pm all year round.
My friend, Helen, recommended this gelato shop to me a couple of years ago, as she knew that I drove out to Matsushima on a weekly basis.   But because I’m bad at directions I could never find the place.
I changed my route one day, and lo and behold, there it was!  Actually, it took me quite a few trips down that route to notice the giant ice cream cone on top of the building.  Apparently, I’m oblivious to the obvious. 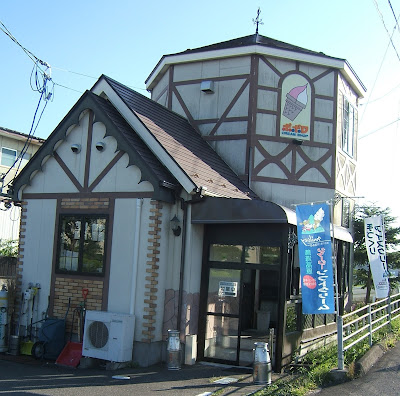 Poporo advertises itself as using 100% all natural ingredients to make the highest quality, homemade Italian gelato.  I’m no authority on gelato (though I did try my best to become one during my trip to Venice), but this mom-and-pop gelato shop offers up some creamy, rich gelato.
My two favorite flavors are the chocolate and chocolate chip (stracciatella).  Pretty plain, huh?
But I’ve also tried the vanilla, which wasn’t sweet enough for my taste buds, and the choco-banana, which tasted much more banana than chocolate.

Overall, I would say that Poporo’s gelato is not nearly as sweet as traditional ice cream, yet it is much creamier, which seems to suit the Japanese palate.  My wife loves the Jersey Milk flavor and thought that my vanilla was great.
One complaint I would have is the taste of the cone.  I ordered a double cone for 330 yen because it appeared to be the best value (as opposed to a single cone for 280 yen).  But every time I’ve ordered the double cone, the cone tasted, shall we say, not exactly from an unopened box.  More like a day-old cone.
I’ve been more satisfied ordering a single scoop in a waffle cone (300 yen).  And even then, this is no sweet Baskin-Robbins 31 Ice Cream waffle cone, but at least much fresher than their standard double cone.
Check out their website for their list of 33 flavors of gelato and sorbettos, though not all are available at the same time.

There are a couple of tables inside with air conditioning, and a good sized parking lot.  You can also order 500 gram packs of ice cream to take home.

If you’re visiting Matsushima and are hankering for something cold and creamy, I highly recommend Poporo Gelato Shop!