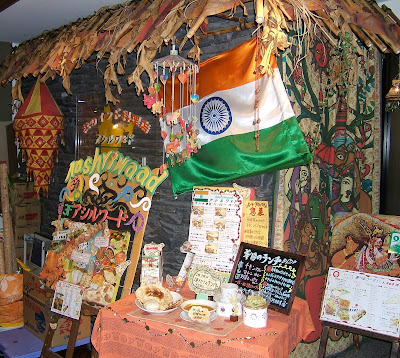 Lunch: 11:00 – 2:30                  Dinner: 6:00 – 9:30
Closed Wednesdays.
A difficult restaurant to find when you don ‘t know where it is.  A couple of months ago while strolling down Chuo-dori I noticed their promotion sign outside.   But the other day when looking for this restaurant I had trouble locating it as they moved their sign to a less conspicuous area.
For lunch, Aashriwaad offers about six different set meals starting from 800円.  I went with the Tandoori Chicken Lunch Set (1000円) that came with a piece of tandoori chicken, a curry of your choice, a huge slice of naan and/or saffron rice, small cabbage salad, small dessert, and a drink.  The choices of curry available on the day that I visited were chicken, mutton, and vegetable.  I chose the chicken.


The tandoori chicken on first bite, though tasty, didn’t seem all that spicy.  But as I kept eating I definitely noticed the spiciness intensifying.
The naan was very good.  Not the best I’ve ever had but definitely good enough to eat on it’s own with having to dip it in anything.  And the chicken curry … FANTASTIC!!!  So flavorful and spicy, enough to get those sweat beads forming.
The saffron rice and salad were just okay, but I had no problem with them as the curry was good enough to cover for their lackluster performance.  The dessert was a porridge-like substance with nuts.  This was also just okay, but it’s nothing I would order by itself.  Probably a normal eater would enjoy this but, me being a picky eater and all, I left half of it uneaten.
When I first ordered, I thought the one naan would not be enough and that I might order an extra one for an additional 100円, but I’m glad I didn’t because I was full from the first naan.
I will definitely come back to Aashriwaad!  Although there are a number of Indian restaurants in Sendai, I would have to say that this is at the top of the leader board.

My friend Helen sent me this message on FB:
"There is also a nice Indian place, called Ganesh, close to Fuzoku Elementary School - 宮城県仙台市青葉区上杉5-7-24 SESビル１F."

My partner and I went here for dinner after failing to find any where close to our hotel that did good ox tounge. Atrr reading the review we thought we'd give it a go. The sign out front is tiny, but we knew what we were looking for.
The hostess gave us Japanese menus and the dinner specials. After checking in that we could umderstand the menu she left us to tend to another table.
We ordered the Dinner for A Couple. It was delicious! All the courses were mouth watering. In this set we ordered the chicken korma amd house special mutton after the recommendation from the hostess. The meal itself was massive for two people. The salad was tasty and helped.put the fire out from the spice. Dessert was interestimg but tasty. Of we were here for longer than a day we would be going back!

I was referring to Aashriwaad Indian. Was super tasty :)

Gotcha. Glad you liked it. I've only tried the lunch but I'm looking forward to the tasting selections from the dinner menu.

I like this place and use for take out often. I recommend the Basmati rice as it goes way better with Indian curry than the Japanese rice.

Glad you liked it! Maybe I'll try the Basmati rice.